Established in the year 1996, Astro is a Malaysian and ASEAN content and consumer company leading in the Digital, TV, Radio, and Commerce space. The company’s television business includes Pay-TV and NJOI. It serves more than 23 million individuals in 5.7 million homes in Malaysia, which are diversified using various platforms like smartphones, tablets, Pay-Tv and more.

Until 2017, the Astro team was using an on-premise payment gateway having various constraints like scalability, security, limited payment methods, etc. Precisely, below were a few major challenges faced by the business:

To overcome the above challenges and citing the future growth in the payment’s domain, Astro decided to move to a scalable and secure solution. Also, one of the primary requirements was to reduce the PCI-DSS compliance cost.

The Astro team was looking for a solution which could meet the aforesaid challenges within a year. Therefore, the Astro-Blazeclan team collaborated to deliver a scalable and secured cloud-native solution in less than a year reducing the overall cost and improving the company’s ROI.

A few highlights from the new solutions provided are:

Moreover, the SFTPS3 was implemented in the new infrastructure to remove connectivity and availability issues reducing the manual interventions.

As Lambda was not based on the event trigger mechanism earlier, the team implemented the SQS-based triggers because of which it was called only in case of an event, thus, resulting in drastic cost-reductions.

Metrics, API Monitoring, Business Metrics & Defect Management System (Ticketing System). This initiative has facilitated the review to be done on a broader scale and to proactively take certain necessary measures for optimizing the overall cost of the system without compromising the performance. In the case of APG, there are several suggestions made which helped in reducing the cost considerably. A few of them are: 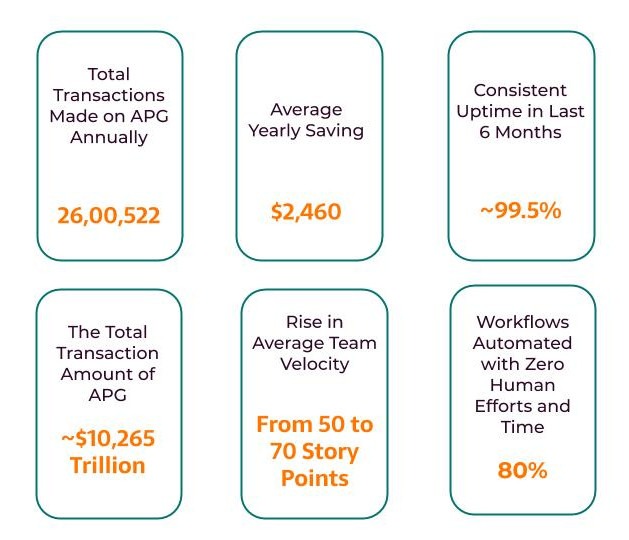 The solution allowed all the communication to happen over the API and there was no direct network access between the infra components. Hence, with a microservices architecture, the new solution reduced the PCI-DSS scope enabling communication through a well-defined interface using lightweight APIs. As a part of AWS architectural design, the team divided PCI-DSS resources in one VPCs and the remaining in the other VPCs, thus, reducing the overall scope of PCI-DSS and operational cost. The solution also ensured that all the credit card information is masked, and TLS encrypted when the information was in transit.