The AWS Cloud operates in 43 Availability Zones within 16 geographic Regions around the world, with announced plans for 11 more Availability Zones and four more Regions. Offering a broad set of more than 70 on-cloud services, AWS certainly helps organizations to be agile and reduce their time to market by implementing numerous services in an IT infrastructure.

But is the transition of migrating the databases from one AWS Service to another equally laid-back and corresponding to optimizing the IT infrastructure particularly in Data Warehousing and Data Analytics applications?

Taking a definitive illustration, any Data Warehousing/Data Analytics application contains at least one of the three AWS services mentioned:

Moving data between these services becomes too much of a hassle.

For a hassle free migration, ETL can also be implemented as a solution to provide support to AWS services. Nonetheless, there is an orchestration required to run jobs and write scripts for sending notifications. Furthermore, as we use AWS services, the scripts containing CLI command to spin up and spin down EC2 Instances/EMR clusters is required for cost reduction.

With such complex implementations and unmanageable systems, what if there is an option available to have a data workflow with integrated orchestration along with notification services providing simple ways to spin up and spin down AWS resources.

AWS Data Pipeline is a web service that helps the movement of data between different platforms at specified intervals. It primarily consists of three parts:

AWS Data Pipeline acts as a source to create a workflow with components corresponding to other AWS services used in a Data Warehouse/Data Analytics application. AWS service components like S3, Redshift, RDS, EMR, EC2, and SNS can also be integrated into it.

For instance, the input file received on S3 is first processed through a Pig script on EMR in any classic Data Warehouse Application on AWS. After processing the output file, it is then loaded on Redshift which acts as a source of reporting to any other downstream system or analysis. The user can also schedule it and send appropriate notifications.

The workflow for the implementation of the above scenario in Amazon Data pipeline appears as mentioned below: 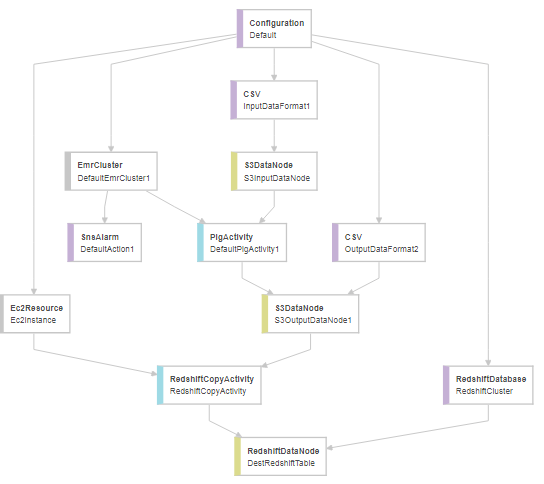 The components of the afore mentioned workflow include:

The workflow determines the order of the load, further terminating the orchestration of any other framework. Integrated SNS takes care of the notifications, and data load operations are easily configured by the Data Pipeline components.

Moreover, this workflow provides an option to spin-up and spin-down the EC2 instances and EMR clusters whenever required to reduce the cost. Another option available is the “Warm” EC2 instances that can be installed using the Task runner JAR on these EC2 Instances. The Task runner process continuously polls the Data Pipeline for any instructions it may have. Incase of EMR cluster, the process will run on the name-node.

An important guideline to the user here, do not hardcode the input and output paths for any activities in Data Pipeline as they are determined by the workflow. For an instance, the pig script without hard coding appears similar to this:

Here, the usage of “$” for ${input} and ${output} is applied instead of hardcoded S3 paths. The same code can also be applied for the task runner JAR on a non-AWS machine to integrate it with AWS pipeline.

The components provided by AWS Pipeline are restricted yet authoritative. For instance, a business logic can be implemented in the form of PIG/HIVE/MapReduce script to be integrated with the AWS Data Pipeline. One can implement the logic in the form of SQL query and integrate it in the form of an “SQLActivity” and a “ShellActivity” to run on an EC2 instance.

Another use case for this can be while looping multiple files and processing them. We can use various components of AWS Data Pipeline to implement this business logic in an “inner” pipeline. The “outer” pipeline can have a below workflow:

The Shell Activity can have the script which will loop through the input and output S3 paths and execute the CLI command to execute the inner Data Pipeline with these paths as parameters.

In a nutshell, working with AWS Data Pipeline is slightly altered from working on regular ETL tools, but it certainly utilizes the benefits of cloud better.